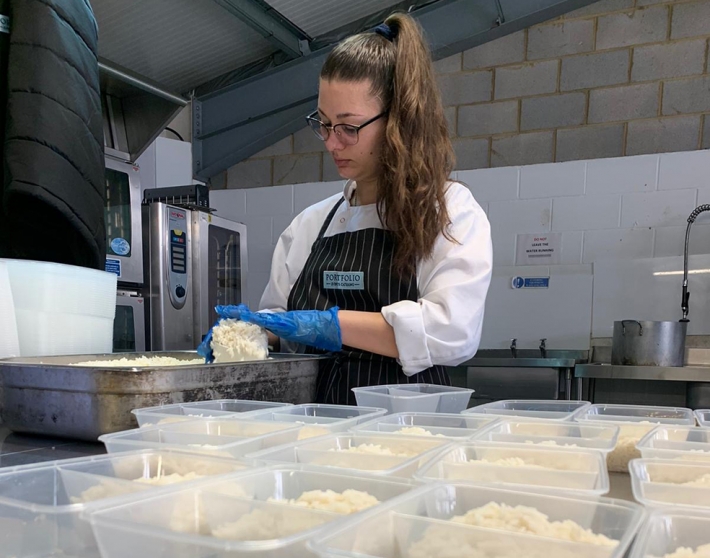 OVER the last six years, local breakfast giant Weetabix has supported the celebration of some of our most passionate foodies through its sponsorship of the Local Food Hero category in the county’s prestigious annual sector competition.

Now, as headline sponsor of the Weetabix Northamptonshire Food and Drink Awards, that role has become all the more crucial as the company not only helps to support sector businesses facing the toughest of challenges, but also honours those which, through their impressive responses to the crisis, have become stalwarts of their communities.

Weetabix Food Company Marketing Director, Francesca Theokli, says recognition of our heroes is vital and indeed, while the awards may currently be operating very differently from their usual format, the company’s commitment to the competition is unwavering.

“The awards were launched 12 years ago to help support and promote the fantastic food and drink sector we have here in the county, one in which Weetabix has a proud 88 year heritage,” said Theokili “When we took on the headline sponsorship this year, we could little have imagined the challenges that we would now be facing. We are thrilled though, to be able to celebrate some of the tireless work that is being done. Proof in the agility and dynamism of our food and drink sector.

“Indeed, the key theme of this year’s Weetabix Northamptonshire Food and Drink Awards is sustainability – encouraging food and drink businesses to act in ways that are good for consumers, the environment and society. Of late, that has got an even sharper meaning to it and so we’re delighted to help shine a deserved spotlight on those who, despite their own trading difficulties, are still managing to play a vital role in local life and beyond”.

Among those demonstrating just such strength of character, resolve and compassion are Richard and Sonya Gordon of The Red Lion in Cranford, reigning co-winner of the Booker Food Pub of the Year category (sponsored by Booker), which was forced to close its doors when the lockdown was put in place.

The couple are now leading a team of volunteers, including furloughed staff members who want to put their newly found spare time to good use, in supplying a thrice-weekly, non-profit-making shopping service for four local villages.

As Richard explains, they source, pack and deliver fresh meat, fruit, vegetables and other staples to those who are self-isolating, all the while observing the social-distancing rules carefully.

“Orders are done online, then we call the customer a few minutes before we arrive, take payment and then leave the delivery on the doorstep so it can be picked up safely once we’ve walked a safe distance away,” said Richard.

“We’ve made hundreds of drop-offs already so, not surprisingly, we’re getting through lots of disposable gloves and hand sanitiser, and while it’s not quite the same as pulling pints or serving award-winning meals, it’s good to know we’re helping those who are vulnerable or who can’t leave their homes, plus it’s keeping us out of trouble that’s for sure.”

Fellow award-winner Mindy Robinson of Sophisticake Creations in Northampton, whose Zucchini and Walnut Cake took the title of Artisan Local Vegetarian/Vegan Product of the Year (sponsored by Daily Bread) last year, is another whose business is on hold, given that demand for her celebration cakes has dried up, yet she too is generously sharing her skills through regular online workshops.

“Every Monday, Wednesday and Friday I live stream a baking session called Make and Bake with Mindy from my kitchen at home, creating a simple recipe from ingredients which I hope most people would have in their cupboards so that I’m not encouraging any extra trips to the shops,” said Mindy.

“Unlike usual TV cookery shows, I post the ingredients in advance on social media so, rather than just watch, people can have a go themselves and the great thing is that lots of children are joining in, so hopefully the legacy of this terrible time will be that I might have inspired the next generation of bakers.”

Meanwhile Simon and Louise Cottle, who run The Red Lion at Thornby, which was named Community Pub of the Year at the awards dinner back in November, are continuing to quench the thirst of locals by offering a twice-weekly drinks delivery service after taking orders via social media, while in nearby Long Buckby, husband and wife team Gary and Rachael Bradshaw from Hamm Tun Fine Foods, whose Little Bertie cheese won the Artisan Local Savoury Product of the Year category (sponsored by Heygates Flour and Animal Feed), have expanded the offering of their deli.

They have not only added many more regular items to their usual range of tasty treats in the shop and online but are also providing a shopping and delivery service to surrounding villages, including dropping off prescriptions from the village surgery.

Thanks to the continuing support of headline sponsor Weetabix and the other category sponsors and partners, the Awards are now acting as a business support hub to the sector and are keen to promote more stories of the county’s local food heroes.

To nominate someone or a business you know to be deserving of recognition, or to let the Awards team know more about any activity in which you may be directly involved, email Rachel Mallows at The Mallows Company on

AN appeal has been launched by a quartet of local charities to feed the county’s most vulnerable, poor and disadvantaged who are the worst affected by the COVID-19 crisis.

Last month, the Northamptonshire Emergency Food Aid Alliance set a target of raising £84,000 to provide 1,000 meals a day, every day, and, three weeks in, expects to continue offering support to those most in need for at least the next two months.

The partnership brings together Northampton’s Hope Centre, the Daylight Centre Fellowship in Wellingborough, East Northants Community Services, which serves the east of the county and Corby, and Accommodation Concern in Kettering and is still appealing for monetary donations for ready meals, which, with all those involved acting as volunteers, will fund only the cost of ingredients, packaging and delivery.

Rachel Mallows MBE DL is the Daylight Centre Fellowship’s Chair of Trustees and says there’s never been a more urgent need for support.

“The county has some of the top 20 per cent of deprived wards in the UK and this national emergency has only compounded their adversity, inequality and poverty to new and desperate levels,” said Rachel.

“This project is addressing the issues for our most deprived communities and while we have applied to trusts and other sources of finance for funding, those take time to be secured and time is something we simply don’t have.

“With hundreds of meals already distributed, we need to continue offering this help for as long as is required so that we can ensure that our isolated, elderly and those at risk don’t become ill due to hunger or, worse still, a further victim of this terrible disease.”

Meanwhile Robin Burgess, CEO of the Hope Centre, says that it’s great to see such organisations pulling together during such challenging times. He said: “Thanks to this new collaboration, we are now able to access stocks of high-quality locally sourced ready meals to add to the food we already supply to people in need.

“During this crisis we have been supplying over two thousand meals a week to rough sleepers in hotels and a further 400 a week through our Hope Foodclub so, with the countywide increase in demand prompted by the current situation, we are really pleased to be working in partnership to produce a vital food resource.”

The Alliance is working in conjunction with Northamptonshire’s Community Resilience Hubs to support those most at risk and to avoid duplicating efforts.

Its support is targeted at those who are unable to prepare their own meals, for whom food parcels may be inappropriate, as well as the county’s rough sleepers who were found shelter through their local council and, crucially, the meals are being created from fresh ingredients and cooked to order, thereby ensuring those who receive them benefit from at least one healthy, nutritious meal a day.

A number of local businesses responded to last month’s launch of the appeal, including a start-up donation of £6,000 from Northampton-based British Pepper & Spice, while Whitco Catering and Bakery Equipment in Thrapston is donating food and also joined Ray Hall of R H Hall Ltd in Bedfordshire and Barrie Mcnamee from Kitchen Clearance UK Ltd in Collyweston in being among those to have donated freezers and microwaves.

Additionally, Kettering catering company Portfolio Events has been preparing the meals at cost, utilising chefs who are volunteering for this work.

For further information about supporting the Alliance, including donating food or acting as a volunteer chef, email Rachel Mallows at

WITH the temporary closure of the county’s pubs and restaurants on whose menus they featured and the current collapse of the food and drink festival calendar, which last year was overflowing with opportunities to pick up locally-made marmalades, beer, cakes and many more mouthwatering goodies, it’s fair to say that some of Northamptonshire’s wonderful artisan producers are the hardest hit by this current crisis.

Thankfully, there is a way to support them and ensure that your cupboards are still filled with some of your favourite county treats – by ordering through the Made In Northamptonshire (MIN) online shop.

With everything from eggs to bread, fruit and veg to meat, not to mention ice cream and chocolates, it’s possible to source your entire shopping list in one fail swoop while, with weekly deliveries direct to your door, you don’t even need to leave the house, keeping the roads free and safe for those whose journeys are necessary.

To place your order, which must be done by midnight on Tuesday for delivery on Friday, visit www.madeinnorthamptonshire.org