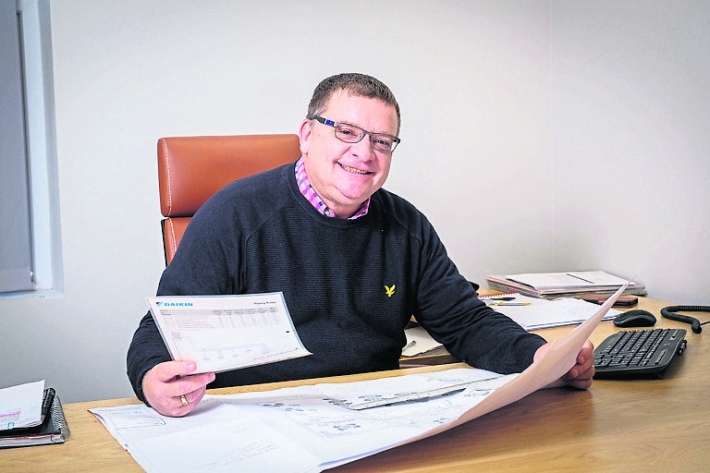 IN business there is one thing knowing what needs to be done and another being able to deliver – a fact that makes all the difference to the success of Super Cool Central.

Clients often opt for the Northampton-based refrigeration and air conditioning specialists not just because of the competitive price but for the team’s commitment to straight talking and high standards.

The company, celebrating its tenth anniversary, has an impressive reputation for its specialist services including installation of air conditioning and refrigeration. Managing Director Peter Matthews heads up the team including engineers who have been involved at a senior level on an extensive range of projects, backed up by service and repair.

Peter said: “We have an unrivalled history in the planning and design, supply, installation and commissioning of air conditioning and refrigeration systems of all sizes. We pride ourselves on being straight talking and honest so, if we feel we will not be able to give 100 per cent satisfaction, we would rather tell the client than make empty promises.

“From day one we are clear about pricing. If a system is down it costs a client precious time and money and can have a major impact on their operations, so it is important we deliver on our commitments.”

This approach has helped make a difference to the company’s success and so has its commitment to training its own workforce. Apprentices taken on by the company follow a training programme which meets the company’s high demands. This includes on-the-job training with experienced engineers backed up by City & Guilds qualifications delivered by Ellis Training.

Peter, who moved from his home city of Cambridge to set up in Northampton, now hopes other businesses looking for high-performing, specialist services will talk direct to the team, which includes Andy Hurlock, Contracts Manager, and Tommy Gardner, Service and Maintenance Manager.

The company, based at 107 Lutterworth Road, Northampton, can be contacted on 0800 334 5243 or see the website at www.supercoolcentral.co.uk

THE refurbishment of sensitive working environments like a busy hospital demand the specialist knowledge and technical expertise of an experienced team.

In these busy environments the team works closely with the clients to find solutions to complete the work with the minimum disruption. Recent challenges have included:

* The maternity unit at Northampton General Hospital is always busy, so a flexible plan was put in place before work got under way in the 11 labour rooms. MD Peter Matthews explained: “We had to be flexible – we couldn’t simply close all the labour rooms so we never knew each day what work could be done. We were able install new energy efficient fan coils and then clean the room so it met clinical standards without making this an issue for the smooth-running of the unit.”

* A constant temperature needs to be maintained in operating theatres but there was an issue when the thermometer hit 25 degrees C. “Warm summer days were affecting conditions and putting operations at risk. We were able to overhaul the air conditioning system which meant there was no need to cancel operations and avoided fines being imposed because of cancellations,” said Peter.

* A team of engineers and fitters were ready to work at 4am each day in Northampton General Hospital’s busy Emergency Department. Peter said: “We never knew from one day to the next when there would be an increase in patients so we had to get the work done with the minimum of disruption but always knowing if the situation changed we would have to pull out for the day.”

A FAULT with a hotel’s air-conditioning during a trip to Gambia was the start of a long-lasting friendship for Peter Matthews and Baboucarr Senghore.

Baboucarr answered the call-out to try to fix the unit and Peter could not resist in sharing his experience.

“It soon became clear that he lacked the tools and the know-how,” said Peter, who then spent the rest of his holiday meeting up with Baboucarr to share his knowledge. They stayed in touch and, months later, after Baboucarr suffered extensive burns after using the wrong tools, Peter and the team at Super Cool were to speak to suppliers and fund hundreds of pounds worth of tools which they took out to Gambia. Now Baboucarr, who supports 19 members of his family, can work safely and can share his expertise with others who are in the trade.