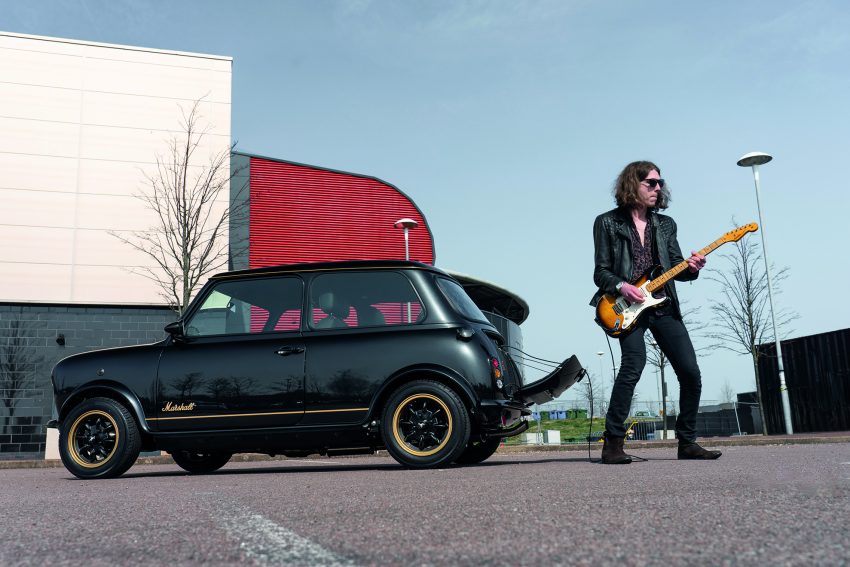 Each car features Marshall-inspired touches including an upgraded sound system, with new dashtop-mounted tweeters, additional speakers in the doors and equipment fitted to the rear parcel shelf.

There are plenty more touches to reflect the Marshall brand and colours, including Marshall Gold brake calipers and wheels Each car is hand-painted in Marshall Black with gold coach-lining to the roof, pinstripes and Marshall logos to the doors.

David Brown Automotive founder and chief executive David Brown said: “We are hugely influenced by music and to partner with such an iconic brand to create this very special Mini Remastered, and to help them celebrate 60 years in business, a momentous milestone, was an opportunity we did not want to pass on. It seems fitting to unite the classic Mini and Marshall – two British icons – and in doing so to inject the Mini, a favourite among music stars through the ages, with serious rock and roll appeal. We are delighted with the resulting car.”

Marshall, based in Bletchley since the late 1960s, and David Brown Automotive will each donate a portion of the proceeds from each sale to the Music Venue Trust, a charity that supports independent concert venues throughout the UK.

Marshall Amplification’s managing director Jon Ellery said: “This project has caused great excitement at Marshall. Mini Remastered Marshall Edition is a truly stylish and fitting way of celebrating our diamond anniversary, uniting our iconic, proudly British brand with a stunningly reimagined version of an iconic design, likely Britain’s most loved car. It is a perfect match.

“We are also thrilled to be supporting the Music Venue Trust with this partnership. It is an organisation extremely close to our hearts at Marshall and we are looking forward to helping them continue their vital work, getting the independent venues and the UK’s independent music scene back on their feet after the shock of the recent years.”

David Brown Automotive located to its state-of-the-art 18,000 sq. ft. manufacturing facility at Silverstone Park in 2017, where it remains among the growing number of innovative engineering and manufacturing businesses.

Mr Brown said: “We are also proud to be supporting the Music Venue Trust, in partnership with Marshall, a fantastic charity doing its utmost to restore the UK’s independent live music scene after such a challenging period.”