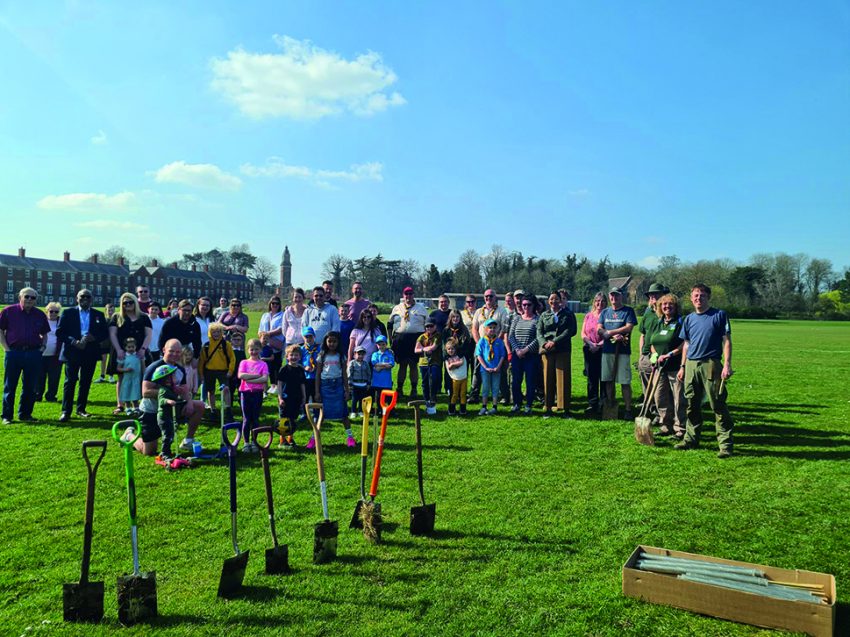 Hundreds of trees have been planted in West Northamptonshire in the first phase of the Queen’s Green Canopy initiative to mark Her Majesty’s Platinum Jubilee.

Residents, community groups and parish councillors from Upton and St Crispin’s in Northampton are pictured on a break from planting more than 400 trees in St Crispin’s Park and Upton Country Park.

Oak, crab apple, birch and rowan trees were among the sapling varieties planted. The parish council has also planted four mature cherry trees in each corner of Upton Square, which will be marked with special Jubilee plaques.

Cllr Nick Sturges-Alex, of Upton Parish Council, said: “We were keen to get involved in honouring the Queen’s reign and leaving something for future generations. We are thrilled to be part of the Queen’s Green Canopy and take a small place in the history of a once in a lifetime event.”

Scout groups have also been busy planting trees at Daventry Country Park, creating an avenue of 24 cherry trees leading to existing orchards. The scouts have already planted almost 300 trees and 4,000 spring bulbs during their monthly volunteering sessions at the park. Oak trees are taking root at the Northampton Army Reserve Centre, planted by the 103rd Battalion of Royal Electrical and Mechanical Engineers and at Abington Park by the Friends of the Park.

Cllr Pinder Chauhan, who heads the Queen’s Green Canopy initiative at West Northamptonshire Council, said: “It is fantastic that so many community groups, organisations, businesses and residents have given their time and contributed to marking the very special occasion of the Queen’s Platinum Jubilee, while also enhancing the natural environment of West Northamptonshire.”